Skip to content
iTre-es – The impact of institutional framework change on ecosystem services provided by trees/shrubs to local communities.

Trees are the unique components of an ecosystem, they act in multiple roles in it. Some of those roles are widely known, for example, we all know the term “lungs of the Earth”. But how many of us know, that the trees act as a unique witness to history – the oldest trees are over 2500 years old.

The highest trees can reach a height of above 100 meters, and this is another proof of their uniqueness. It means that they must carry the water to the height of 32 storeys, and beat the gravity force without using the modern technology. The trees can achieve much more – for example, they can communicate with each other.

The trees are unique, there is no doubt about that… But in spite of their remarkable nature and advantages brought to humans, their value can cause some controversies, for example, in a city.

Prof. UŁ dr hab. Jakub Kronenberg, economist and adjunct professor on the University of Łódź in 2012 created a list of ecosystem services provided by trees to the cities..

Part of this added value can be measured with the help of modern tools, this helps to evaluate ecosystem services. This is how New York City Street Tree Map was created, with each and every city’s tree having its position and description.

Point cloud generated using Terrestrial Laser Scanning gives complete information about the geometry of an object and thanks to simultaneously collected images, about its color variability. These properties make the production of computer animations relatively easy. Such animation perfectly presents the spatial relationships between the object and its surroundings. One of the main goals of the “Bartek 3D” project was to create the 3D model of the monument tree “Dąb Bartek” and to prepare a digital 3D presentations, which can be used for environmental education. The traditional ground measurements (hypsometers: VERTEX Haglöf; SUUNTO; tape) were performed during the leaf-off season in April 2013 and April 2014 and repeated in leaf-on period in July 2013 and October 2014 using FARO FOCUS 3D scanner (courtesy of AGH in Krakow, IBL Warsaw and TPI Ltd.), VZ-400 (RIEGL; Laser-3D), scanner Leica C10 (AGH) and triangulation scanner RevScan (HandyScan; courtesy Casp System) were used. The point cloud filtration and classification were performed using TerraScan (Terrasolid) and various CAD trial solutions like 3DReshaper (TECHNODIGIT) and Geomagic (3DSystems). The results based on TLS technology showed some differences comparing to existing data obtained by traditional methods.
See the most known tree in Poland in 3D – “The oak tree Bartek in 3D” (geo.ur.krakow.pl)

LiDAR is not sufficient to identify all the benefits, that we gain by the presence of trees in our ecosystem. Values such as aesthetics or recreation are subjective and cannot be easily quantified. Here the local pundits and the expert mapping methodology are the solutions, as presented in the work by Chmielewski et al. (2016).

To successfully conduct such valuation it is crucial to cooperate with residents of the local community. Querying local population gets easier with the use of surveys using interactive maps. This tool was used, for example, by Sędzimir Foundation in the project Licz na zieleń. A lot of cities started using this technology, in Poznań to perform geoinformation analysis of the influence of the ecosystem structure on citizens wellbeing.

Geoinformation analysis of the influence of the ecosystem structure on Poznań citizens wellbeing: Example of the use of geosurveying to evaluate the importance of green areas for Poznań citizens. 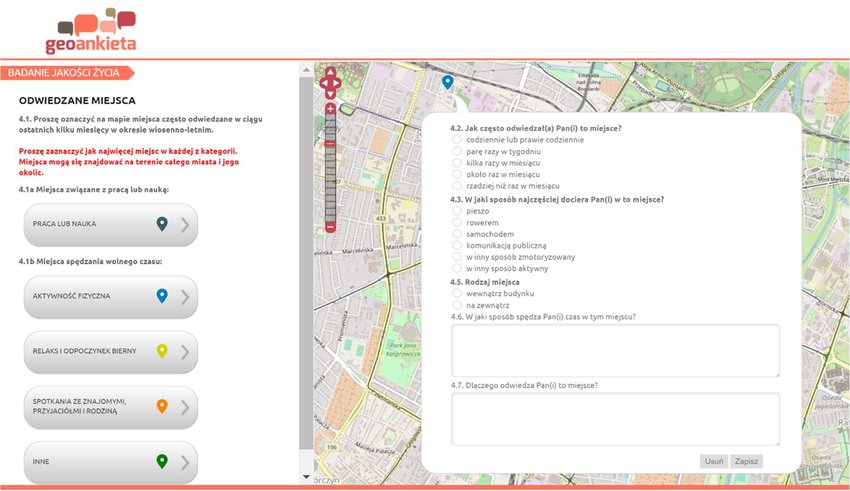 How to connect all the previously mentioned sources of information about services provided to citizens by the trees and shrubs? Will the delivery of the information summary to the citizens influence their view on the value of trees in the public and private areas? We aim to answer these questions with our current project. We encourage you to follow our news and publications!